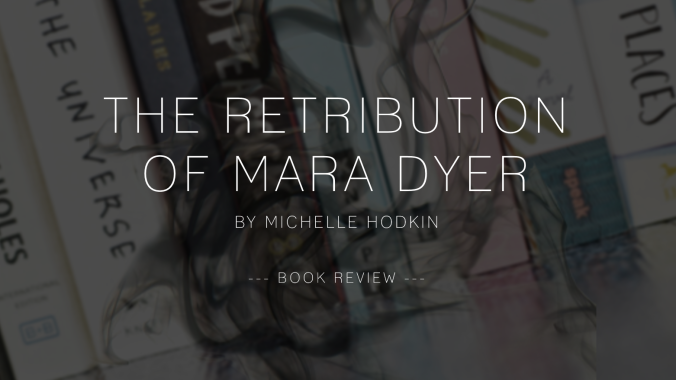 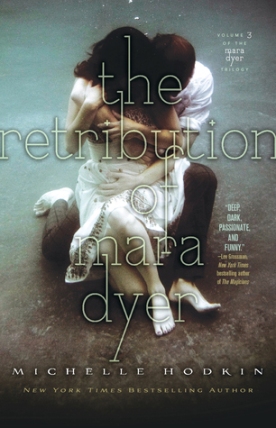 The Retribution of Mara Dyer (Mara Dyer, #3) by Michelle Hodkin

Mara Dyer wants to believe there’s more to the lies she’s been told.
There is.

She doesn’t stop to think about where her quest for the truth might lead.
She should.

She never had to imagine how far she would go for vengeance.
She will now.

Loyalties are betrayed, guilt and innocence tangle, and fate and chance collide in this shocking conclusion to Mara Dyer’s story.

“You are a girl, Mara. A girl blessed and cursed.”

Initially, I gave this book 4-stars but after having a good night’s sleep and time to process my feelings I decided to drop a star. And now I’m sad because I badly wanted to love this book and series. Hmm, I like it generally but it’s not hands-down-greatest-book-series-good, it had a handful of scenes that I did like but as a whole I just didn’t loved it.

The final book to the Mara Dyer series will give you answers and a bad headache. The first few chapters were GORE, it was so bloody I had to close the book a few times just to take a break. Maybe it’s just me because I am a bit squimish when there’s needles, knives, skin and blood involved.

“This is like the perfect storm of bad decisions.”

And then, the journey of a bunch of teenagers seeking out answers of what they really are begins and of course they (mostly Mara) have to find out the most needed answer to this question: WHERE THE HELL IS NOAH SHAW?

The plot took an unexpected turn for me.

WHAT I EXPECTED TO GET FROM THIS SERIES: Mara Dyer is possessed by her grandmother and now she has her powers, this explains all the changes physically and mentally. Noah Shaw is the one destined to save her from being possessed.

But no, no possessing of souls. Which was quite disappointing (but who am I to complain right?)

WHAT I GOT INSTEAD: G1821-3. Basically they’re mutants, because of this gene that gives them “powers” but make them mentally unstable as a “side effect”. AND THEN IT BECOMES A CHOSEN ONE KIND OF STORY WHERE THEY NEED TO FULFILL THEIR DESTINIES.

Why? Why must we go on that road? I was really overwhelmed when the Hero and Shadow thing was revealed, and I felt like everything was just made for that moment. I wasn’t surprised with some of the plot twists though, it was quite predictable.

When the whole revelation took place, I was like— HUH. AH. UHM, OKAY WAIT LET ME PROCESS THAT FIRST. HUH, THIS IS REALLY WELL THOUGHT OUT. And then Noah, voiced-out my thoughts in a single line.

Even if what he says is true, I am simply out of fucks to give. I had few to spare to begin with.

Then the Hero and Shadow thing again, with the deaths and resurrections. At that point, I just wanted to give up already because HOW DARE YOU PLAY WITH MY FEELINGS. But secretly though I really wanted one of them to die (and not resurrect) BUT OF COURSE THEY WILL NOT CONFORM WITH THEIR DESTINY BECAUSE LOVE CONQUERS ALL.

I will not find peace with her. But there will be no greater passion.

“And I would rather have today with you than forever with anyone else.”

Well, now okay. It’s okay, you don’t have to kill each other anymore. Go on and spread love. BUT WHAT WILL HAPPEN NOW? TO NOAH, WILL HE BE LOVED TO RUINS? WHAT WILL HAPPEN TO MARA, NOW THAT SHE HAS FULLY MANIFESTED? WHAT? I was hoping to find my answers in the several pages left but

OH GOD. What I found out is that they finally have sex, or make love, or explore the depths of each other, or whatever you want to call it.

Thank heavens for the epilogue. I really want to know what will happen to them because of their decisions (and if Mara will get pregnant) but no, somehow the old Mara came back, I don’t know but the way the epilogue was written it was like the Mara before all the insanity. Anyway, I didn’t got my answers. I got this line instead,

WELL OKAY GO ON WITH YOUR LIFE. LEAVE ME HERE CONFUSED AND FRUSTRATED AND TORN APART. OKAY.

Despite the fact that I didn’t got the answers that I wanted, I really liked the way it ended with the writing thing, it was so brilliant that I wanted to re-read the first book just to continue the cycle.

My name is not Mara Dyer, but my lawyer told me I had to choose something.

AND I ALMOST FORGOT. Let’s take the time to appreciate Jamie, for his ability that became very convenient throughout the book, his funny and witty remarks, and for bringing humor and a light tone to this very dark and heavy story!

“I kind of want to see Mara Crucio their asses,” Jamie said.
The boys snickered.
“Avada kedavra, more like,” I said.

So that’s it. I am so done with this series. I still don’t know what will happen to Mara and Noah. But I hope they will love each other against all odds and have a baby that will be destined for who-knows-what.

Thank you Michelle Hodkin for making me confused, frustrated, creeped-out, paranoid, and all the feelings at once. I will never look at the mirror the same way because of you.

MORAL STORY OF THE SERIES: DON’T NAME YOUR CHILDREN MARA.

“There is power in a name.”

6 thoughts on “Review: The Retribution of Mara Dyer (Mara Dyer #3)”