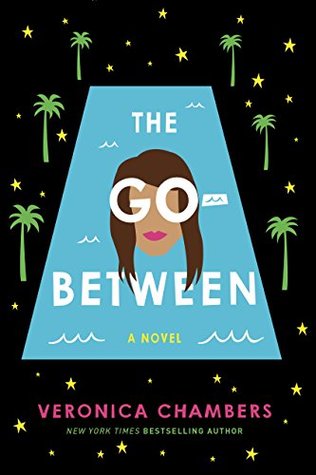 The Go-Between by Veronica Chambers

Fans of Jane the Virgin will find much to love about this coming-of-age novel from bestselling author Veronica Chambers, who with humor and humanity explores issues of identity and belonging in a world that is ever-changing.

She is the envy of every teenage girl in Mexico City. Her mother is a glamorous telenovela actress. Her father is the go-to voice-over talent for blockbuster films. Hers is a world of private planes, chauffeurs, paparazzi and gossip columnists. Meet Camilla del Valle—Cammi to those who know her best.

When Cammi’s mom gets cast in an American television show and the family moves to LA, things change, and quickly. Her mom’s first role is playing a not-so-glamorous maid in a sitcom. Her dad tries to find work but dreams about returning to Mexico. And at the posh, private Polestar Academy, Cammi’s new friends assume she’s a scholarship kid, the daughter of a domestic.

At first Cammi thinks playing along with the stereotypes will be her way of teaching her new friends a lesson. But the more she lies, the more she wonders: Is she only fooling herself?

Believe me, I’m also surprised how much I didn’t like this book. I’m not a fan of Jane the Virgin, I haven’t seen it yet, but my friend loves that series so I had hopes for this book. I read the plot of Jane the Virgin and this is nowhere near it! I’m so sorry but I feel robbed because I wasted my time reading this one.

A daughter of a telenovela actress, Cammi, is living the high life in Mexico city although she never felt as glamorous as her mother. When her Mom got an offer on a role, their family flew all the way to Los Angeles. Everything’s still posh and sparkly but in LA nobody knew who Cammi was unlike in Mexico, so when her new friends assumes that she’s on a scholarship, because how can a Mexican girl like her afford going to an expensive private school, she goes with the lie and pretends to be poor and submits to all the stereotypes and downright racists things her friends tell her.

That’s basically the whole plot of the story. I don’t even know where to begin but I was so, so disappointed with this book. It had such a good premise, how often do you come across a story about a daughter of a Telenovela star? Besides the rich culture and diversity that the author brought there’s really nothing else that’s good.

The biggest problem that I had is the writing style. It’s told in Cammi’s point of view but it felt as if she’s just telling the story from a long time ago. It was written in way that will not make you connect with the story and characters, but it’s like someone’s telling you a story and your obliged to listen.

I couldn’t connect with Cammi, maybe because I really didn’t like her. She’s sixteen years old but with her maturity it was like reading from a 12 year old’s point of view. Every time she lied to her friends, I just wanted to scream at her.

I think this book wanted to show how racist can people be but was poorly executed. Her friends just assumed that she’s poor and her mother’s a maid and basically just wanted to be friends with her to add some diversity to their group. I didn’t mind it first, it really felt like a promising plot but the problem is that the whole story goes around that lie. Cammi kept the lie until the end, even when it was starting to go out of hand like when her friend offers to give her expensive stuff that she could secretly afford or when her friends saw her credit card! She could have admitted the lie and then challenged all the racism they thrown at her but no, what I got was a petty resolution of her friend hardly admitting that she was being racist that was so worthy of an eye-roll. I just can’t with this book.

The other characters also felt very off and Cammi’s relationship with them is shallow. Her very famous Mom was the Telenovela star from the start to finish, I didn’t feel any connection between her and her daughter. Even the ending scene where it’s supposed to be a sweet moment for them felt scripted and forced.

Next is, Cammi’s boyfriend whose name is so irrelevant, I can’t remember it. Their love story goes like this, they flirted at a party back at Mexico then Cammi’s friend gets mad at her because she wanted that guy. The next thing is this guy is already Cammi’s boyfriend but she wants to take a break because she’s going to LA and LDR is hard but in the end she calls him. SO MUCH CHEMISTRY. I know the book doesn’t focus on the romance but why introduce a romance if it’ll be poorly written and underdeveloped?

On last thing is at the start Cammi says something about a hashtag that exposes all the not-so good stuff spoiled and rich kids on Mexico do that can be found on Instagram. So it really bothered me how Cammi was able to keep the secret far too long especially when her friends were getting suspicious. If I were one her friends, the first thing I’ll do is make a Google search on the new girl because that’s what teenagers do in real life! Basically, I don’t get all the fuss with this book.

I’m so sorry for the long review, I personally don’t give low ratings and bad reviews often but this book didn’t really work for me. I seriously don’t recommend it, you all just read some other wonderful May release. Don’t waste your time here.

5 thoughts on “Review: The Go-Between”