I decided to do my reviews for the two books in the Illuminae Files. I know, I’m so late on boarding this spaceship! Now I get what the hype is all about because THESE BOOKS ARE SERIOUSLY OUT OF THIS WORLD. They were so, so good and I can’t wait for the last book in trilogy which is Obsidio, which will be published on March 2018. I don’t even know how I’ll be able to wait that long.

Anyway, here’s my reviews or basically my feels about Illuminae and Gemina: 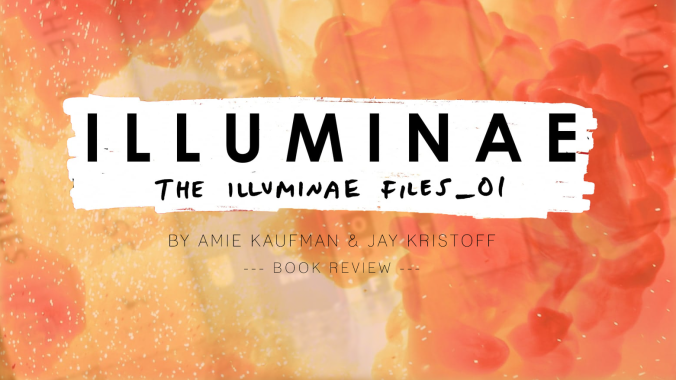 This morning, Kady thought breaking up with Ezra was the hardest thing she’d have to do. This afternoon, her planet was invaded.

The year is 2575, and two rival megacorporations are at war over a planet that’s little more than an ice-covered speck at the edge of the universe. Too bad nobody thought to warn the people living on it. With enemy fire raining down on them, Kady and Ezra—who are barely even talking to each other—are forced to fight their way onto an evacuating fleet, with an enemy warship in hot pursuit.

But their problems are just getting started. A deadly plague has broken out and is mutating, with terrifying results; the fleet’s AI, which should be protecting them, may actually be their enemy; and nobody in charge will say what’s really going on. As Kady hacks into a tangled web of data to find the truth, it’s clear only one person can help her bring it all to light: the ex-boyfriend she swore she’d never speak to again.

BRIEFING NOTE: Told through a fascinating dossier of hacked documents—including emails, schematics, military files, IMs, medical reports, interviews, and more—Illuminae is the first book in a heart-stopping, high-octane trilogy about lives interrupted, the price of truth, and the courage of everyday heroes.

Why did I pick up this book? Because everyone was screaming that I should? Actually no, that’s not it. There’s so many hyped books that I haven’t read yet but I got this one because it is SO beautiful and one of a kind. When I saw the hardbound at the bookstore, I knew that I NEED it in my life (and I’m not even a hardbound collector, I buy paperbacks because I’m cheap lol).

So anyway, I don’t even know how to summarize this book and its plot. Just think about a badass hacker girl, spaceships, lowkey romance, highkey action, plot twists, a poetic artificial intelligence, and more PLOT TWISTS. It’ll just blow your mind.

The format is so unique, the story unfolds through e-mails, hacked files, illustrations, private messages, etc. and this book literally had me reading the pages upside down or in a spiral motion. And all profanities or “bad words” were blacked out so it was fun reading through the black and guessing what words were removed. I swear the reading experience is amazing and the format is genius.

Despite loving the format I actually had a hard time engrossing myself at the start. I was like 20 pages in and I had no idea what’s going on, I mean I get the gist of the story but I couldn’t follow everything that was happening. It sometimes felt like I’m just reading a random e-mail. But that was at the start, as I reached a point where everything’s making sense and I already adjusted to the format or the way of storytelling—I just flew through the pages and couldn’t stop reading.

The story follows Kady and Ezra. Kady broke up with Ezra just before their home got attacked. I really liked Kady’s character, I think she’s so badass and she reminded me of Cress in The Lunar Chronicles because they’re both hackers. I also like that the romance was lowkey because there were so much going on but we still got some sweet moments. The dynamic between the two was one of the best I read, their conversations were sweet and funny and is a joy to read.

I loved reading AIDAN’s parts, it was weirdly amazing. It’s poetic, intriguing and sometimes creepy. I don’t even know how to explain.

So basically, I have no idea how to review Illuminae. I don’t want to spoil anything for those who haven’t read it yet but I swear the plot is SO good and unexpected. I was screaming by the end of it. Just read it if you haven’t, me and mostly everyone loved it. JUST READ IT.

Moving to a space station at the edge of the galaxy was always going to be the death of Hanna’s social life. Nobody said it might actually get her killed.

The sci-fi saga that began with the breakout bestseller Illuminae continues on board the Jump Station Heimdall, where two new characters will confront the next wave of the BeiTech assault.

Hanna is the station captain’s pampered daughter; Nik the reluctant member of a notorious crime family. But while the pair are struggling with the realities of life aboard the galaxy’s most boring space station, little do they know that Kady Grant and the Hypatia are headed right toward Heimdall, carrying news of the Kerenza invasion.

When an elite BeiTech strike team invades the station, Hanna and Nik are thrown together to defend their home. But alien predators are picking off the station residents one by one, and a malfunction in the station’s wormhole means the space-time continuum might be ripped in two before dinner. Soon Hanna and Nik aren’t just fighting for their own survival; the fate of everyone on the Hypatia—and possibly the known universe—is in their hands.

But relax. They’ve totally got this. They hope.

Once again told through a compelling dossier of emails, IMs, classified files, transcripts, and schematics, Gemina raises the stakes of the Illuminae Files, hurling readers into an enthralling new story that will leave them breathless.

If you haven’t read Illuminae don’t even dare to read this review. Of course it’ll spoil the first book for you so just don’t.

Generally, I liked Gemina more and it such a surprise because usually the second book in a trilogy sucks. Illuminae was such a great book that I couldn’t even imagine how the authors can top it off. BUT GEMINA IS SO FREAKING AWESOME HAHA LOL I CAN’T EVEN!!

I think it’s mostly because I liked Hanna and Nik better. This series is more plot-driven and I don’t know if it’s just me but I personally had a hard time really connecting with characters even in Illuminae and that’s the main reason behind my 4-star rating. But it’s okay because THE PLOT IS SERIOUSLY GOLD. I connected more with Hanna compared with Kady, it just felt like Hanna’s character was more realistic. She’s also a total badass but she felt human.

Nik is probably my favorite character and I don’t even like bad boys. But despite being from a dangerous drug dealer family with lots of tattoos plus a tragic background, he’s like a slightly burnt cinnamon roll. And there were several points in the book where I almost cried because of him.

The plot is basically like Illuminae, two teenagers who at first has no intention on saving the world or at least the spaceship but ends up doing so. Heimdall is invaded by a group sent by BeiTech, and then Hypatia is arriving there. But there’s so much more I don’t want to say but just imagine, wormhole, a weird sucking creature used for drugs, and again PLOT TWISTS.

Seriously this had me gasping and almost crying, of course it’s still told through a collection of different documents. The illustrations here so, so good plus there’s more AIDAN and that funny surveillance guy that I’ll go mad if they don’t give the identity of in book three because I’m like guessing that he’s Ezra somehow?

So like in the first book I also needed to adjust with the format for a bit before I was totally in it. I was lost for the first few pages but eventually everything picked up in a nice pace. The other thing that I didn’t like or was sad about is that there were only a little appearance of Kady and Ezra, I just missed them and thought that they’ll participate here more.

If you thought Illuminae was twisted and out of this world, I don’t even know why you’re thinking twice about continuing on with the series. Just read Gemina for more mind-blowing stuff plus a great new pair of characters!