Hope you all had a wonderful Christmas/Holiday, did you get all the books you wished for?

There’s still a few days left in 2016, and I wanted to take this time to spread some love and good vibes! That’s why I’m so glad that Laura @ Bibliofagista tagged me to do this tag, thank you so much lovely. Don’t forget to also check out her post.

So without further ado, let’s get some celebrating:

END_OF_DOCUMENT_TOKEN_TO_BE_REPLACED

I’m here with a tag because tags are so fun to do, and this tag is like one of the most fun tags that I’ve ever seen so shout out to the person who created this tag! Keep being awesome. (I’m so bad at intros, sorry for being slightly weird.)

Anyways, I completely mistaken this tag for the This or That tag, but this tag is really different from that tag except for their names which are a tiny bit alike. (This sentence gave me an headache.)

I was tagged by the lovely Marta @ The Book Mermaid, you should all definitely head-over to her blog and check her out.

SO ENOUGH WITH THIS CONFUSING INTRO AND LET’S GO DO THIS TAG!

END_OF_DOCUMENT_TOKEN_TO_BE_REPLACED

It has been SO long since I did a tag mainly because I’ve been focusing on finishing my book reviews but this tag definitely caught my attention and I really wanted to do it. So here it is, thank you so much Pierina Reads for tagging me! Be sure to check out her post as well and also this tag was originally created by Jamie @ A Little Slice of Jamie.

END_OF_DOCUMENT_TOKEN_TO_BE_REPLACED 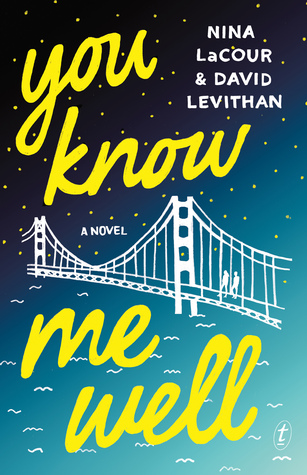 You Know Me Well by Nina LaCour, David Levithan

You Know Me Well is a tender and joyful young-adult novel tracing the powerful friendship of two lovesick teenagers—a gay boy, Mark, and a lesbian girl, Katie—over the course of Pride Week in San Francisco.

Told in alternating chapters, You Know Me Well explores how Mark and Katie help one another overcome heartbreak, fractured friendships and the dizzying speeds of change.

I was really excited for this book, it was one of my most anticipated releases last June and thank heavens because it definitely exceeded my expectations.

END_OF_DOCUMENT_TOKEN_TO_BE_REPLACED

I’m here to do a very late Wrap-up for the month of August (obviously) and I just realized that my last Wrap-up was back in May, which just shows how I’m a really bad blogger. But anyways, August had been really good to me because I managed to read a few books this month!

So yay for that, and enough of my blabbering… here’s my August Wrap-up!

END_OF_DOCUMENT_TOKEN_TO_BE_REPLACED

Genie Shares is a Saturday feature in geniereads, where in Louise () shares a personal book-related story.

It has been so long since my last Genie Shares posts, well honestly it has also been so long since the last time I opened up WordPress. Anyways, today I don’t have any interesting book-related story to share but, I’ll be sharing some , I mean reasons why I have been so inactive lately.

So this post is mostly a what-have-I-been-doing-or-reading or an overall life update because if you guys noticed, I’ve been MIA (Missing In Action) since I think June and I know you all been missing me!

(Just kidding, I know no one misses me because you all are busy reading and blogging and going on with your lives!) END_OF_DOCUMENT_TOKEN_TO_BE_REPLACED

Hello there my dear Muggle friends!

Aentee @ Read at Midnight is hosting the Harry Potter Blog Festival, where in it’s Potterhead July and a lot of bloggers signed up to post something that we all love talking about which is of course Harry Potter.

So as for my post which is a couple of weeks late (I blame school), I’ll be sharing a few fantastic stuff that I found in the internet that would hopefully keep us distracted while we’re waiting for the book release of the Cursed Child. END_OF_DOCUMENT_TOKEN_TO_BE_REPLACED

First of all, I just want to say that I want to say Sorry for not being active on my blog for the last couple weeks, I’m still adjusting with school and I’ve always sucked at managing my time and being organized. I admit that I ignored my blog, especially last week and now I feel bad about it. I feel like a bad parent for it. And OMG guys, I MISSED YOU ALL SO MUCH. I missed interacting with all of you and writing up blog posts and comments, hope I could catch up on everything!

Anyway, enough of that because this post is really all about the books that I read last summer, it’s like a summer wrap-up. And because I know most of you are still on your summer vacation, I’ll be recommending some Summer Reads for all of you.

END_OF_DOCUMENT_TOKEN_TO_BE_REPLACED

The Only Thing Worse Than Me Is You by Lily Anderson

Trixie Watson has two very important goals for senior year: to finally save enough to buy the set of Doctor Who figurines at the local comic books store, and to place third in her class and knock Ben West–and his horrendous new mustache that he spent all summer growing–down to number four.

Trixie will do anything to get her name ranked over Ben’s, including give up sleep and comic books–well, maybe not comic books–but definitely sleep. After all, the war of Watson v. West is as vicious as the Doctor v. Daleks and Browncoats v. Alliance combined, and it goes all the way back to the infamous monkey bars incident in the first grade. Over a decade later, it’s time to declare a champion once and for all.

The war is Trixie’s for the winning, until her best friend starts dating Ben’s best friend and the two are unceremoniously dumped together and told to play nice. Finding common ground is odious and tooth-pullingly-painful, but Trixie and Ben’s cautious truce slowly transforms into a fandom-based tentative friendship. When Trixie’s best friend gets expelled for cheating and Trixie cries foul play, however, they have to choose who to believe and which side they’re on–and they might not pick the same side.

From what I could tell about relationships and love and all that noise, it needed to be more than just mathematically reasonable.

First of all, that synopsis from Goodreads gave too much details. I think it already sold it at the second paragraph, so the last one could have been left behind because it tells a bit too much. Second, I don’t read comic books and watch Doctor Who, ALL THOSE REFERENCES MADE ME FEEL INADEQUATE for this book. And third, GOSH THIS BOOK IS EVERYTHING, I LOVE IT TOO MUCH. END_OF_DOCUMENT_TOKEN_TO_BE_REPLACED

I was tagged by the lovely Amanda @ My Books Opinion Site to do The Book Sacrifice Tag! Thank you so much Amanda for tagging me and you guys should go check out her take on this tag as well.

So today we are sacrificing some of my least favorite books with the help of different situations. I sincerely apologize if I’ve mentioned any of your loved books, some sacrifices were just destined to be made.

So let’s get to it! END_OF_DOCUMENT_TOKEN_TO_BE_REPLACED